He’d win by a landslide.

Howard Tayler of Schlock Mercenary comic fame is finally publishing the entire list of his 70 Maxims of Maximally Effective Mercenaries (my favorite of which is Maxim 11:  Everything is air-droppable at least once.)  If you bought a copy of his upcoming role-playing game, you get a copy of the book.  If not, you had to wait for his annual calendars for twelve new Maxims each year.  No calendar this year, though.  You have to wait for the book.  But he has given out two new ones, (along with the original 51) and Maxim 64 is today’s Quote of the Day:

An ounce of sniper is worth a pound of suppressing fire.

Someone asked, “Why are the presidential candidates so lame this year?”

Back in the dim and distant past of the year 2000 when George W. Bush was running against Al Gore, Jr., comedian Lewis Black had the following observation:

In my lifetime we’ve gone from Ike to G.W. Bush.

In my lifetime we’ve gone from JFK to Albert Gore.

If this is evolution, in a few years we’re going to be voting for PLANTS!

As democracy is perfected, the office of president represents, more and more closely, the inner soul of the people. On some great and glorious day the plain folks of the land will reach their heart’s desire at last and the White House will be adorned by a downright moron.

Ladies and gentlemen, this may be the election year for Phil O’Dendron.

OK, let’s schedule this thing for Sunday, January 10, 2016.  The venue will once again be the Elzy Pearson Public Shooting Range outside of Casa Grande, AZ, just South of I-8, just West of I-10.  Range opens about 7AM – roughly dawn.  Getting there early means getting a shooting bench.

The range has three areas with shooting benches and sun shades. There is a 100 yard range, a 300 yard range, and a 25 yard range. There’s also a bigass rock outcropping on the side of the mountain about 600 yards downrange if you want something to bounce bullets off of. The city of Casa Grande has seen fit to equip the range with a Porta-pottie, but there still isn’t any running water. Everyone needs to bring lots of fluids, if nothing else. Oh, and sunscreen. It may be cool, but the UV count is still high.

The range is unattended. We are expected to behave ourselves and clean up afterward. The site is posted “Absolutely No Explosives,” so no Tannerite on site, and no exploding targets of any kind. Sorry. They don’t like .50BMG at the range, but I’ve seen people shooting them there and so far as I know, no one has complained.

The same cannot be said for Tannerite.

Full auto, on the other hand, is A-OK. (Just have your paperwork. The police range is about 400 yards away, and they have come to inspect paperwork.)

There are concrete shooting benches, but no chairs. Bring your own. The shooting area is fenced, so no vehicles downrange. If your stuff is heavy, bring a cart that’ll fit through a 3′ man-gate. (I have one of those.)

The range HAS NO TARGET STANDS. Bring something to put your targets on. The ground is about as hard as concrete, so the cheap-ass wire frames you’re supposed to stick in the ground? Uh-uh. My stand is made of 2″ PVC pipe and 2×2 lumber. Other people just bring big cardboard boxes they set on the ground, or their own target stands that just sit on the surface. Whatever works for you.  I’ll also be bringing some steel targets that can stand up to .300 Win Mag.

Bear in mind, this is a public range. Other people not associated with this shoot will be there, too, and recently a negligent discharge at that range resulted in a 14 year-old girl being shot through the chest. She’ll survive, but just damn.

We’ve been doing this since about 2010, so c’mon out and have a good time.  Please leave a comment if you think you can attend.

Growing up, my greatest fear was dying in a school shooting. I still remember: Two boys in black walking into my classroom, one of them holding a stapler at a right angle. I saw the matte black. My mind read: gun. I panicked. I grabbed the arm of the student next to me. “What?” he asked, startled. I started shaking and laughing and breathing and sweating. The boys were only stopping in to see if my math teacher had any extra staples. They were not there to kill us, me first in the front row.

As long as guns exist, I don’t have a chance of saving the world. I feel useless against daily tragedy, against assault rifles and bullets. Here is something humiliating: I am afraid to write all this. Some people love guns. I do not love guns. I wish fewer people owned guns. Often, I wish no one owned guns. I realize many people will disagree with me, and I do not want someone who loves guns to hurt me.

What pathetic hubris!  “As long as guns exist, I don’t have a chance of saving the world.”  You sure your shoulders are strong enough for that load?

I do not have answers. I do not know which kinds of guns should be allowed and what types of background checks are most effective.

(And on a very personal note: I deal with mental illness every day….

This is my shocked face.

I visited the author’s Twitter feed. I found that she had re-tweeted one by Matt Taibbi:

Putting aside the gun control argument for a moment, I wish people could simply agree that in an ideal world, there would be no guns.
— Matt Taibbi (@mtaibbi) December 3, 2015

That prompted me to write my fourth Tweet ever:

This is what we’re up against, folks.  Magical thinking and mental illness.

A guy who claims to be an NRA member, but…

So, who’s up for another Southern/Central Arizona Blogshoot?  It’s about that time of year again.  Elsy Pearson Public Shooting Range, Casa Grande, AZ.  Chime in in the comments.

UPDATE:  New post.  The date is January 10.  Please check in there if you think you’re coming.

I’ll put it up on Monday:

XKCD weighs in on Markley’s Law as only XKCD can: 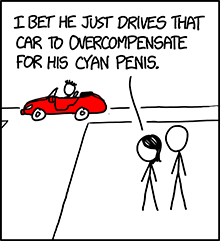 As someone on Facebook noted, I wonder if the ‘gun as a phallic symbol’ meme explains why they keep wanting to grab ’em?