I wish the man would blog again, but I’ll take ’em where I can get ’em.  He left this over at Kim duToit’s place.  I’ll fix his edit and quote in whole:

I no longer believe the axis entirely pivots on Right vs Left.

I was using the term “collaborative establishment” until I encountered the term “Deep State”, which I think is probably more apropos.

Viewed as dispassionately and as objectively as I can muster, the federal US government is a machine whose function is to ingest a significant fraction of the people’s productivity, and transform that wealth into various benefits and favors. Both establishment parties fully, 100% agree that this machine shall persist and grow, and will drop all differences towards that end, collaborating fully. Where the parties compete is on the output end, crafting such packages of benefit such that they will believe will attract the most power, votes and influence.

This is the single largest coherent economic activity on the planet, and is jealously guarded as such, with all the violence implicit in a gang banger protecting his profits on a single drug corner. The “military industrial complex” was merely the prototype for the “governmental economic complex”.

The election of 2016 is entirely about the people of the US recognizing that they’ve lost control of their government, (even if they couldn’t articulate it in similar terms) that this was the result of normal electoral politics, and that the the cost of rejecting the continuation of the status quo via the Established candidate Hillary was electing the outrageous blowhard and loose cannon Trump, in the wild hopes that doing something different would result in a different outcome.

The extent to which Trump simply recognized and rode that wave to the Oval Office is a subject of academic debate.

For myself, I think that this is a temporary respite on the long march to Deep State Progressivism, for it is the Progressives, an inherently statist, totalitarian and parasitic entity that is the primary architect of its favorite tool, the Deep State, as well as the primary antagonist of the infiltration and subversion of the institutions of influence whose purpose is now to position in the public’s mind the essential necessity and centrality of the Deep State as the most critical component of a just society and source of the good life.

Nonetheless, Trump is neither the solution nor antithesis to this. The most we can hope for is enough demolition to the underpinnings of the Deep State’s mechanisms that some deep reform will be made possible, but on this, I am not optimistic.

Connie du Toit has passed.  I just received a message from Kim.  Connie has passed due to cancer, and now he’s got to pay off those bills.  If you’ve spent much time around the gun blogs and gun boards, you’ll be familiar with Kim du Toit and his classic essays like “The Pussification of the Western Male” and “Let Africa Sink.”  Kim & Connie were always ones to chart their own path, and that path has cost them.  So if you’re so inclined, please consider contributing to Kim’s Surviving Life Without Connie GoFundMe page.

I was pointed at this piece in an exchange over at Facebook. I’m not through with reading it yet, but it’s interesting enough for me to recommend it to my readers who have attention spans. Situational Assessment 2017.  Excerpt:

I use John Robb’s term “Trump Insurgency” here to highlight the fact that the election of 2016 was not an example of “ordinary politics”. Anyone who fails to understand this is going to be making significant errors. For example, the 2016 election is not comparable to the 2000 election (e.g., merely a “close” election) nor to the 1980 election (e.g., an “ideological transition” election). While it is tempting to compare it to 1860, I’m not sure that is a good match either.

In fact, as I go back and try to do pattern matching, the only real pattern I can find is the 1776 “election” (AKA the American Revolution). In other words, while 2016 still formally looked like politics, what is really going on here is a revolutionary war. For now this is war using memes rather than bullets, but war is much more than a metaphor.

This war is about much more than ideology, money or power. Even the participants likely do not fully understand the stakes. At a deep level, we are right in the middle of an existential conflict between two entirely different and incompatible ways of forming “collective intelligence”.

As I said, interesting.

You can see the similarity between liberals and Muslims.

Only a handful of each are violent, but the peaceful ones won’t do anything to stop them.

They both believe in religions that have long since been debunked by reality.

They both want the entire world to embrace their faith, by force if necessary.

They both have large elements who believe that the rule of law shouldn’t apply to them, only their own internal law.

They both think it’s okay for famous people to molest kids.

THAT should leave a SCAR.

Your Moment of Zen:

So, I like to watch those car restoration/modification shows.  You know:  Restoration Garage, Overhaulin’, Detroit Muscle, Engine Power, Counting Cars, etc.  My wife has asked me on more than one occasion why I watch that stuff when I don’t do any of that.

Long, long ago when I was but a lad, my brother had a book on popular engine swaps, and one of them stuck with me – a Pontiac 215 cubic-inch aluminum-block V8 into an MGB.  Not quite twice the displacement, more than double the horsepower, and with a Muncie 4-speed, 50 lbs less weight.  My dad had owned a Triumph Herald with a 1500cc Spitfire engine equipped with dual Weber carbs.  I was too young to drive it, but I remember that car even now.  My brother rolled it.

But the idea of stuffing a V8 into an MGB has always stuck with me.  Turns out, it’s a very popular thing.

So I bought an MG to stuff a Ford 302 and a 5-speed into.  And, because I need the garage space and cubic dollars to restore & customize the MG, I sold my Mustang.

And here’s what I bought: 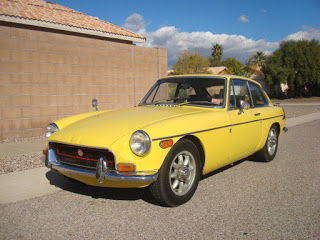 It’s a 1970, with all the niggling problems that you’d expect from a 47 year-old British sports car, but it does run fine.  As I described the experience of getting it home from across town:

That was exciting. No brake lights, no turn signals, one mirror that vaguely worked, no instrument lights, a speedo that doesn’t even vaguely work, it was dark, and thankfully I forgot my sunglasses.

Don’t think I’ll be taking it to any car shows soon.

Rust issues appear to be minimal, but we’ll see once all the paint comes off.

Now I’ll have even less time for blogging.  But you’ll get progress reports here.

UPDATE, 2/8/17, @3:14AM MST:    OK, while I can be a fool, I am not a complete idiot.  I don’t fit in this car.  Literally.  Getting into and out of it is (if you’re watching me do it) a comedic act. My size 13 feet and six-foot corpulent frame just aren’t designed to bend in the ways necessary to climb behind the wheel of this thing.  After two pretty much sleepless nights (see the time stamp of this update) I’ve come to a conclusion – I’ve made a mistake. Given my size, I’m not too small of a man to admit to a mistake.  Now to minimize the cost of that mistake.  Further updates as I try to dispose of this white elephant.  Dammit.

There are some damned clever people out there.  Best I’ve seen this evening:

Q) What are “Things that have been sacked fewer times than Tom Brady?”

This wouldn’t be the first time a bunch of yanks burned Atlanta to the ground at the end of a long conflict.  – Traci Simer

I’m sure there will be more and possibly better tomorrow, but in the immediate aftermath, not bad!