In relation to my previous post, there’s a companion YouTube podcast of Michael Moore, Jeff Gibbs – the director of the film – and Ozzie Zehner who wrote the book The Dirty Secrets of Clean Energy and the Future of Environmentalism that inspired it. They discuss the reaction the film has been drawing. At the time I write this, there were eight comments, most of which were people OUTRAGED that they didn’t know this information.

I left this comment. I’m curious as to how long it will last before being deleted.

People like myself – I’m an electrical engineer – have been trying to point out that wind and solar are not viable alternatives to fossil fuels for literally decades, and the only reason they are implemented is the massive subsidies of taxpayer dollars. That electric cars are not “pollution-free” but instead move the pollution from the tailpipe to the smokestack of the power plant (not mentioning the pollution associated with battery manufacturing and disposal), which is usually located somewhere far away from the people who can afford electric vehicles. What have we received in return? Vitriol and hatred and accusations of being on the payroll of “Big Oil.” Well, as Mr. Gibbs discovered, we were right, and all that money WAS wasted. Now you want us to “rein in our ability to consume,” and control our population. Well, if you haven’t noticed, Europe isn’t reproducing at replacement rate. The only reason the US population is rising is immigration. But you’re telling the people living in the Third World, “We’ve got ours, you can’t have any. It’s for the Planet.” Who are you going to trust with the POWER to “rein in our ability to consume”? The same people you relied on in the Green movement?

I strongly advise you to watch this film.  It is a brutal indictment of the environmental movement as organizations run by cynics taking advantage of useful idiots and financed by corporate billions.  It illustrates, with painstaking accuracy, the false promise of “green energy,” – wind, solar, biomass.

It is also an advertisement for the Voluntary Human Extinction movement.  Quotes from speakers starting at about 46 minutes in:

There are too many human beings using too much, too fast.
—
As a global community we really have got to start dealing with the issue of population.
—
Population growth continues to be, not the elephant, but the herd of elephants in the room.  We have to have our abilities to consume reined in, because we’re not good at reigning them in if there are seemingly unrestrained resources.

Just who is going to do the reining in?  And how?

The filmmaker has a valid point – there are real problems that need to be addressed, and the environmental movement is just a “feel-good” effort that is in fact counterproductive.  There is little to no incentive to actually address the problems, because no one wants to live like the Amish except the Amish, and I’m not certain about them.

But I did notice that the only comment made about nuclear energy was an aside jab at General Electric, which he notes makes both nuclear power plants and wind turbines.

Seriously, watch it.  It’s worth your time.  Meanwhile, I have to see my psychologist about my endorsement of a Michael Moore-backed documentary.

[youtube https://www.youtube.com/watch?v=Zk11vI-7czE]
UPDATE: 5/26/20 – “Planet of the Humans” has been yanked. One of the short sequences in the film was used without the permission of the creator of it, and he filed a Copyright takedown claim. Michael Moore is getting hammered by the Left for being RIGHT WING.

What do they all have in common?

In other news, the glaciers in Glacier National Park that were supposed to be gone this year are still running strong, and Michael Mann lost his defamation lawsuit because he still wouldn’t release the raw data he used to produce his infamous “hockey stick” global temperature graph. 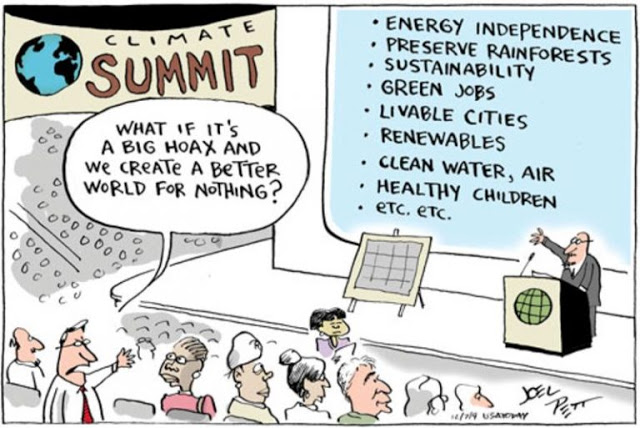 I was going to respond to it, but didn’t feel like dissing the poster at that time.  Today I saw someone else had the proper response: 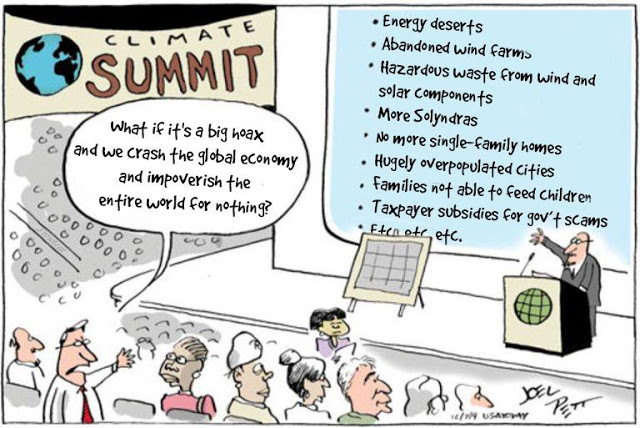 Yeah, that’s what I wanted to ask.

Wind turbines kill endangered bird species, electric cars require toxic batteries and run off of coal-fired power plants, The infrastructure necessary to provide charging stations for plug-in EV’s will cost billions and require even more power generation, but no one wants a nuclear power plant in their back yard.

Engineering isn’t about “solutions,” it’s about picking the best options and minimizing the costs of the trade-offs.

Politics is only about getting elected and re-elected. Politicians can promise the moon without any concern about the costs – monetary, environmental, social. And they depend on a public ignorant to the realities. Shouts of “Consensus!” are used to ensure that no one opposed gets listened to.

That’s not how science – or engineering – work. Reality is what remains even if you don’t believe in it.

Democrat Sen. Mazie Hirono: ‘Believe in Climate Change as Though It’s a Religion’

Maybe this wouldn’t be such a divided country if skeptics weren’t treated like heretics. Maybe these times would be more normal if Democrats thought before they spoke. Of course, they thrive on division. They can’t exist without it. Their modus operandi is to set people against each other and then profit from the conflict. And of course, the whole time they have to blame their opponents. That’s how they’ve always done it, and they’ll keep doing so as long as it keeps working. 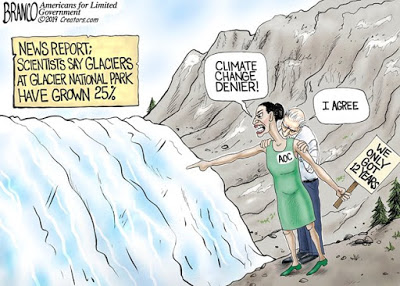 The National Park Service has quietly removed all the signs put up by the Obama administration that told visitors that the glaciers would “all be gone” by the year 2020 due to global warming… because… it’s 2019, and the glaciers are all still there and have been growing.

Glacier National Park quietly removed a sign at its visitor center saying the glaciers will disappear by 2020 which were originally placed because former President Obama believed the predictions pushed by the left’s climate change hypothesis.

According to federal officials, several years in a row of high snowfall and cold temperatures totally obliterated a computer model that authorities relied on to claim that the glaciers would all be melted by 2020, Daily Caller reported.

I left the Konkolville Hotel at 5:50 this morning, drove into Orofino, checked the tire pressure (*wink*), and then headed South.

Just South of Twin Falls, what did I run into?  This:

I drove through this crap for 100 miles, then finally it switched back to rain.

Until I got near Ely, NV. It’s doing this:

When I checked in at the hotel, I asked what the weather forecast was. It’s supposed to snow until 11PM. The temperature currently is 34ºF and it’s going to get colder. Who was it that thought going home through Ely was a good idea? And what the hell happened to Global Warming?

I’m in Burlington, Vermont this week.  This is the view out my window at just after 6PM local time today:

Flying in to Burlington on Monday, we passed over Lake Champlain where I noticed that it seemed at least 90% covered in ice.  From the Burlington Free Press, February 17:

For the second year in a row, the lake appears to be frozen from one side to the other. National Weather Service high resolution satellite images show ice pretty much everywhere on the lake.

That’s enough for meteorologists to declare the lake as “closed” or frozen over, said Peter Banacos, a meteorologist at the NWS office in South Burlington.

Burlington has had below freezing temperatures throughout February, he said. This weekend Vermonters experienced wind chills as low as minus 40, which likely consummated the freeze-over.

The lake froze completely in 2014, but this is the first time in a decade that the lake has closed two years a row. Vermonters last saw the lake completely freeze consecutively in 2004 and 2005.

The instructor of the class I’m taking here went down to the lake last night. He reported the ice is still “about a foot thick.”

I know where my money is riding on this question.