The list of now-banned “assault-style weapons” has been released. I don’t have time to go through the whole list, but in part it includes actual missile launchers:

Hell, I’d like one of those Dragons, or a TOW. Maybe a Stinger. Where’s the NRA on this?!?

So a Canadian whack-job goes on a 12-hour shooting and arson spree, killing at least 23 people before suicide-by-cop.  No mention of what weapon(s) the killer used, but Prime Minister Trudeau came out immediately stating that Canada was going to implement an “assault weapon” ban.

But I think The Narrative™ that there are only about 300 million firearms in private hands is well and truly busted, since as a nation we’ve been buying guns for 230+ years, not just the last 20.

And look at March, 2020.  Largest number of background checks in a month, EVER. Closest previous record was December, 2015.  What precipitated that again?  We’ve had more background checks in the first three months of 2020 than in the entire YEAR for 1999 through 2005.

And all the guns that have been purchased?  I don’t think the people who bought them did it with the intention that they’d give them up if asked nicely.

Schools are safer than they were in the 90s, and school shootings are not more common than they used to be, researchers say

From the linked piece:

Mass school shootings are incredibly rare events. In research publishing later this year, (James Alan) Fox (Lipman Family Professor of Criminology, Law, and Public Policy at Northeastern) and doctoral student Emma Fridel found that on average, mass murders occur between 20 and 30 times per year, and about one of those incidents on average takes place at a school.
—
Their research also finds that shooting incidents involving students have been declining since the 1990s.
—
Four times the number of children were killed in schools in the early 1990s than today, Fox said.
“There is not an epidemic of school shootings,” he said

Not according to the bleating gun control crowd. The actual numbers are pretty bad, but they always have to inflate them because apparently reality isn’t bad enough. It’s like hate crimes. There’s more demand than there is supply.

A recurring theme at Quora in the gun discussion is “what makes America different from the rest of the world when it comes to gun control?”

Well, this for instance:

Virginia gun sales dramatically increase in 2019: ‘I didn’t think I would ever be buying one’

66-year-old Ida Wright decided today was the day she was going to buy her first hand gun. The grandmother of eight says growing crime, and now fears of gun restrictions by lawmakers, convinced her that it was time to make the purchase.

“I didn’t think I would ever be buying a gun, but things are changing so drastically,” Wright says. “If we don’t protect ourselves, who else is going to protect us?”

Not by a long shot. (Pun intended.) RTWT.

Now I don’t know where Ms. Wright lives, and it’s entirely possible that crime there IS growing, but nationwide it’s been dropping for a couple of decades and is now at levels not seen since the 1960’s.

But that’s not the Media Narrative™. They’ve been trying to frighten people into supporting “gun control” but instead are promoting gun ownership. Gun sales have repeatedly set records for the last ten years. The media tries to convince us that fewer and fewer people are purchasing more and more guns, but the facts don’t support that.

So, after a week of “news” about the gun-rights protest held in Virginia yesterday, predicting a repeat of Charlottesville (or worse), the declaration of a State of Emergency by Gov. Blackf… Ralph Northam, etc, the media hasn’t been more disappointed in a lack of violence since the premiere of
The Joker.

The Narrative™ has been well and truly busted.

Not that that will change anything.

On Quora I have seen a myriad of (and answered a few) questions about gun control, the power of the NRA, why Americans won’t surrender their guns like civilized Europeans, etc. I have seen answers accusing gun owners of being nothing but angry, racist, sexist, bigoted aging fat white men with small penises, mentally ill, brainwashed, homicidal, and pretty much every slander you can think of. (For the record, I’m an aging fat white man with a standard-issue penis, thank you.) What did the Richmond protest show us? Well, if you watch ABCNNBCBS, not much. If you went on the web to the sites of multiple groups who attended, this: 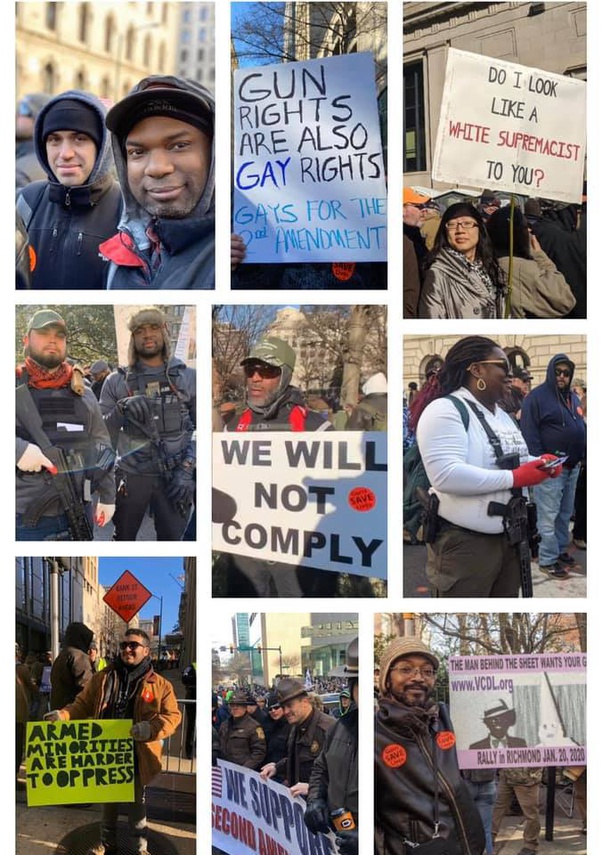 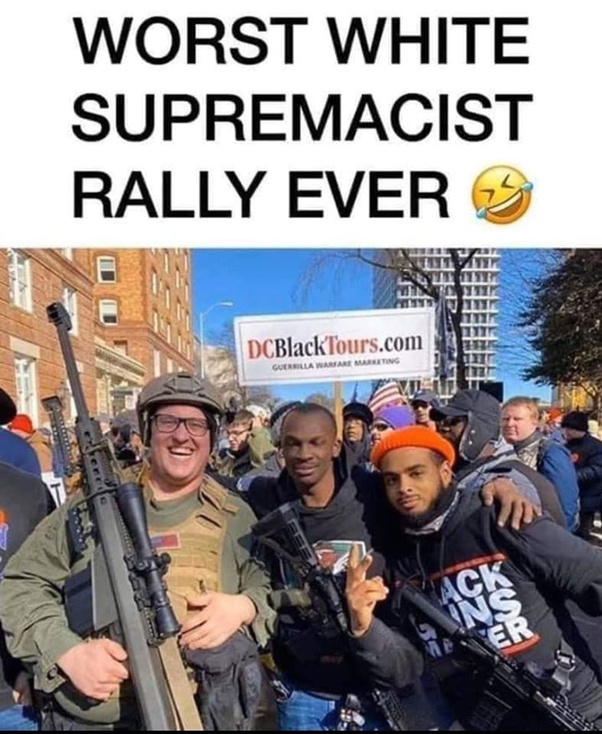 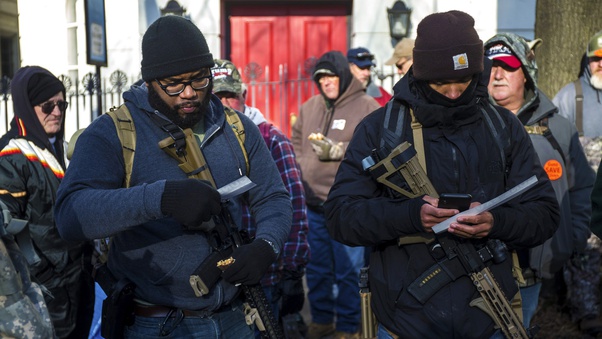 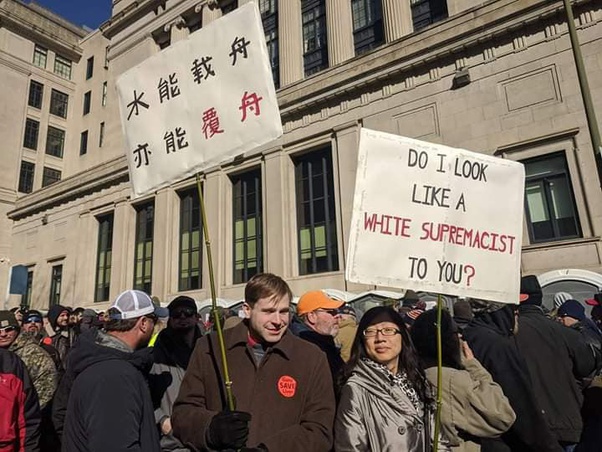 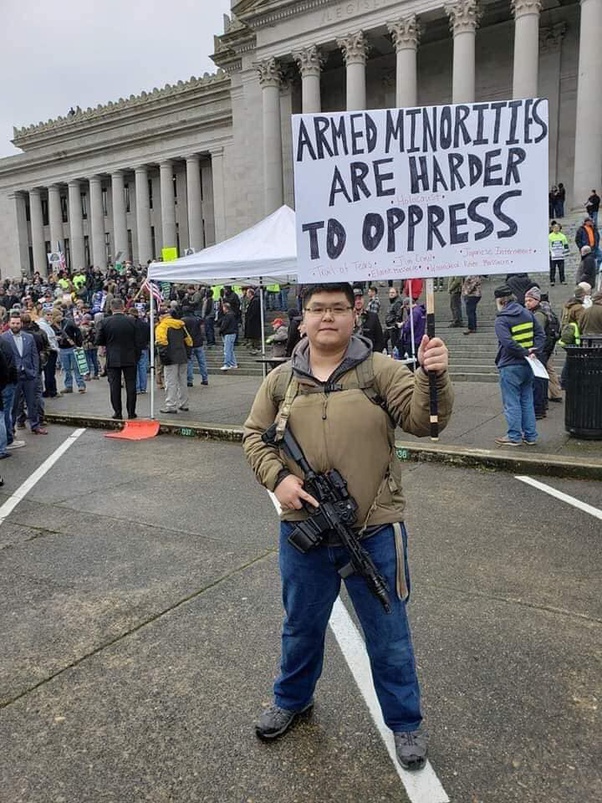 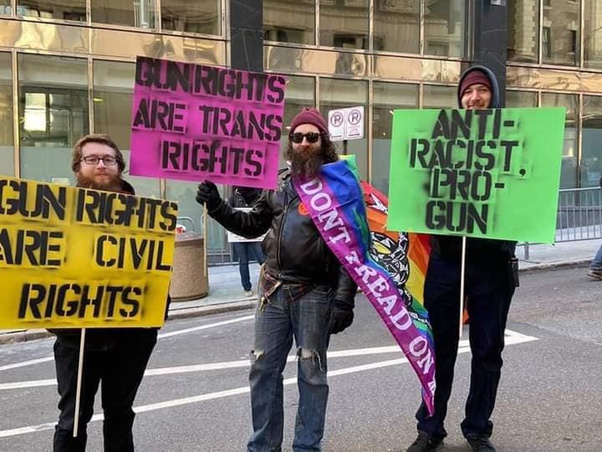 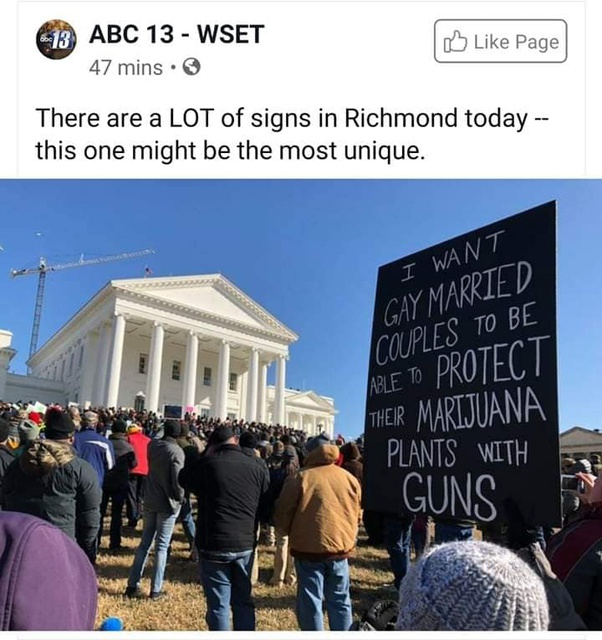 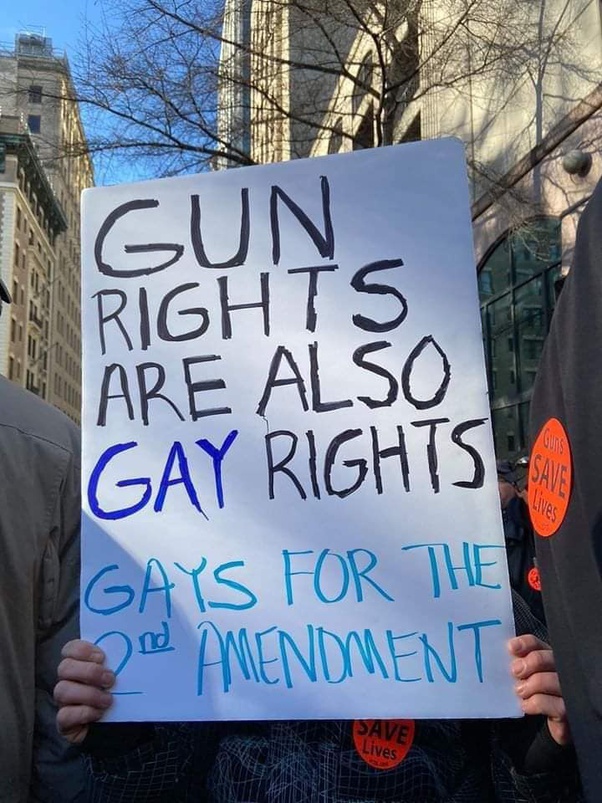 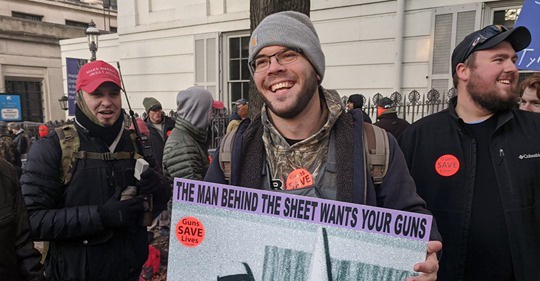 And this was not a small protest. THOUSANDS of people showed up. And they didn’t all get MLK day off from work. 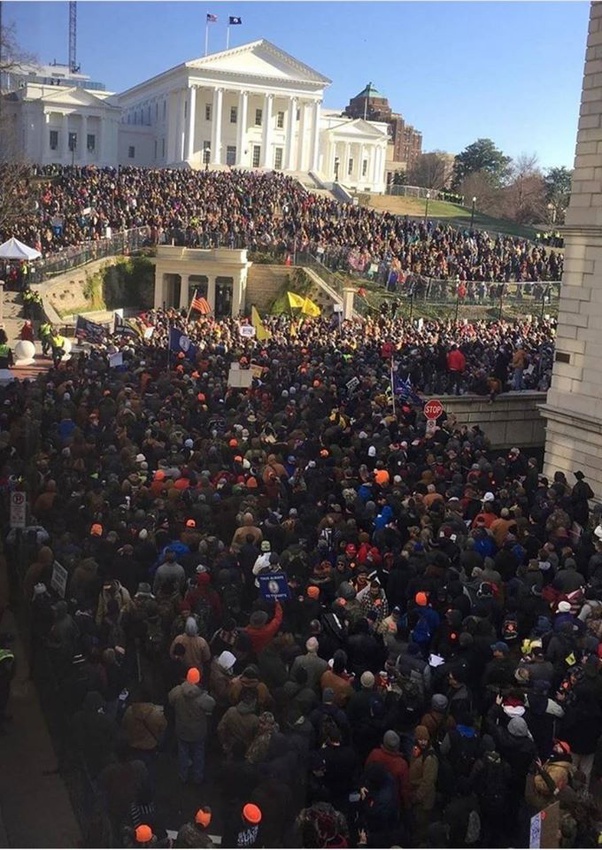 It wasn’t the National Rifle Association behind this – it was the grassroots Virginia Citizens Defense League. How do you know it was grassroots? Most signs were hand-lettered, not printed up and handed out to protesters bussed in by third-parties.

No, this was people petitioning their government for redress of grievances, and out of all the attendees, I think this man said it best: 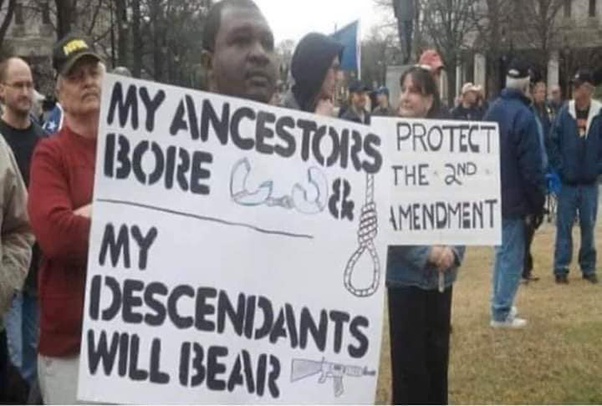 And first runner-up for the “Well Said” Award: 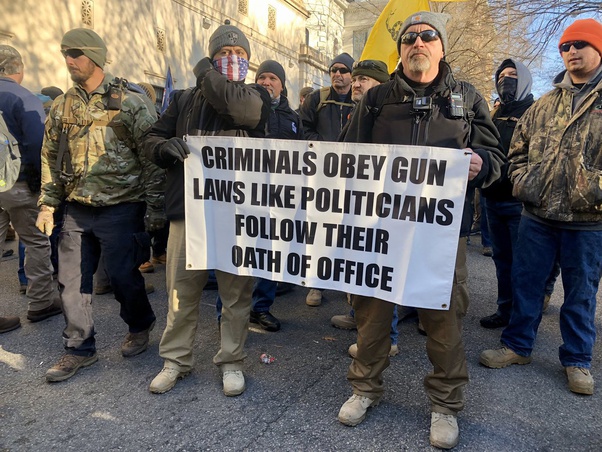 Why is the “gun lobby” so powerful? Because EVERY SINGLE STATE has people like these, and we will not be disarmed.
Oh, and unlike after Leftist protests, our people clean up after themselves: 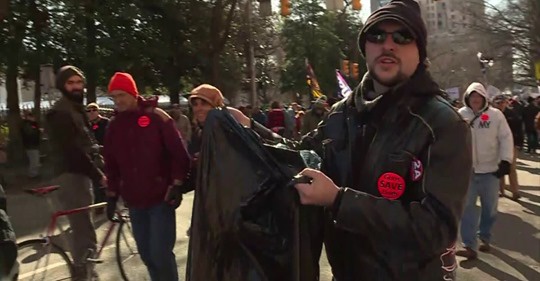 Perhaps because it ISN’T ENFORCED.
Police have arrested this felon four times in the last four months. 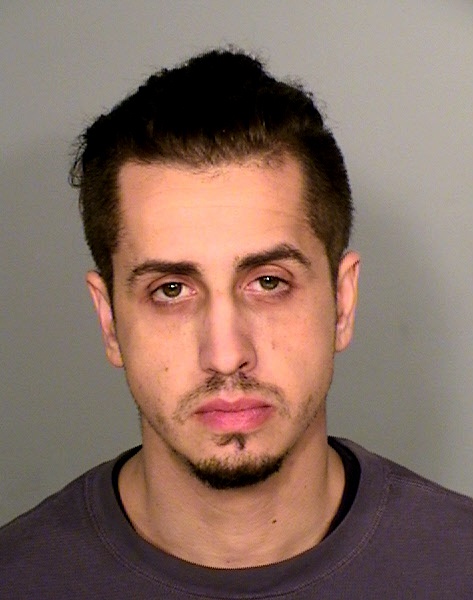 Progressive Governments’ Economic War on the NRA Fails in Court

Not long ago, progressive state and local officials nationwide were vowing to take down the hated National Rifle Association by targeting its pocketbook. When city authorities in Los Angeles and San Francisco gave that idea a try, they were following the lead of Governor Andrew Cuomo, who had unleashed New York financial regulators to go after the gun-rights organization’s access to insurance and banking services.

Now all three are facing a reckoning in court, based not on the Second Amendment but on the First. Without needing to even consider the issue of gun rights, federal courts are recognizing that boycotts enforced by government power can menace free speech and free association.

The amusing part is that the public officials themselves are helping to provide the basis for these rulings by tweeting and speechifying about how much damage they intend to do the NRA.

“Gun Control” isn’t about guns, it’s about control, and that pesky Bill of Rights and the rest of the Constitution stand in our rightful rulers way!

The gun-control group responsible for a 2018 march on Washington, D.C., raised the vast majority of its funds from undisclosed donations over six figures, a recently released tax document shows.

As Tam once wrote,

Poor Lefties; they’ve been playing on astroturf so long that they don’t know grassroots even when fed a mouthful of divot.

Edited to add:  See also Everytown’s Finances at Shall Not Be Questioned.