(B)rigid has some recipes on her blog. which is like saying there is some paint on the ceiling of the Sistine Chapel – Reflectoscope (Jim) from the chat at Gun Nuts Radio tonight.

Well, the Christmas weekend was pretty relaxing. I didn’t do much of anything but recharge my batteries. But I am reminded once again of stuff I wanted to post about but didn’t get around to.

First up, Stephen Halbrook has an important book out that he (and the Independence Institute) want to drive to #1 on Amazon and beyond: The Founders’ Second Amendment: Origins of the Right to Bear Arms. The push started on the Bill of Rights day (Dec. 15), but Amazon ran out of stock when it hit #140 overall. Apparently it’s back in stock (though Amazon is still quoting 3-4 weeks). If you haven’t, buy a copy. Buy one for your nearest high-school library, if nothing else.

Next up, our buddy Saul Cornell. It appears that he’s still living in his jabberwocky world where history says what he twists it to say. David Hardy has written an article published in the Northwestern University Law Review on the source material Saul Cornell used in pieces that were cited in both majority and minority opinions in D.C. v Heller. David’s piece proves conclusively that Saul was, once again, exceedingly selective and misleading about what was in those source materials. As Clayton Cramer explained,

. . . as several reviewers of Cornell’s most recent book have pointed out, Cornell’s work is riddled with gross factual errors–and like Bellesiles, those errors are remarkably one-sided . . . .

He does seem to do that a lot.

And get away with it.

One wonders how the Stevens dissent in Heller could have argued, from these lecture notes, that St. George Tucker, on whom the Court relies heavily, did not consistently adhere to the position that the Amendment was designed to protect the ‘Blackstonian’ self-defense right . . . or that the notes suggest the Second Amendment should be understood in the context of the compromise over military power represented by the original Constitution and the Second and Tenth Amendments.

The brief answer appears to be that the dissent relied uncritically on the portions of the lecture notes quoted by Saul Cornell in a 2006 article, which the dissent cites as authority. The article sets out the quotations cited by the dissent and argues that they reflect Tucker’s earliest formulation of the meaning of the Second Amendment, and casts the right to bear arms as a right of the states.

In fact, the article’s quotations are misleading; they come from Tucker’s discussion of the militia clauses of the original Constitution, which predictably deal with military power and the States. Tucker argues that the States have the power to arm their militias should Congress not do so since such power is not forbidden to States by the Constitution and hence is protected by the Tenth Amendment, just as any arms given would be protected by the Second Amendment. When, less than twenty pages later, Tucker does discuss the Bill of Rights, the language he uses closely parallels his 1803 Blackstone’s Commentaries, usually down to the word.

The right of the people to keep and bear arms shall not be infringed – this may be considered as the palladium of liberty. The right of self defense is the first law of nature. In most governments it has been the study of rulers to abridge this right with the narrowest limits. Where ever standing armies are kept up & the right of the people to bear arms is by any means or under any colour whatsoever prohibited, liberty, if not already annihilated is in danger of being so. In England the people have been disarmed under the specious pretext of preserving the game. By the alluring idea, the landed aristocracy have been brought to side with the Court in a measure evidently calculated to check the effect of any ferment which the measures of government may produce in the minds of the people. The Game laws are a [consolation?] for the government, a rattle for the gentry, and a rack for the nation.

Can’t have that when you’re trying to prove that St. George Tucker didn’t believe the right to arms was an individual one, independent of militia service! Best not mention it! Your Joyce Foundation monies might be cut off!

Keep giving him hell. Maybe Cornell can be disgraced out of his position like Michael Bellisiles was.

Og and Billy have what amounts to a religious disagreement: Og figures we’re too evil to endure without external govenment and Billy figures if we are bad, then our institutions will be bad, too. Pared down to that, it appears we’re thermodynamically doomed: can’t win, can’t break even, can’t quit the game. Life is, however, a local, short-term reversal of entropy: we keep tryin’ stuff and in the long run, nobody is in charge of anything but themselves. Yeah, it’s more fluff. Turtles all the way down. Go outside, reverse some entropy and, damn you, smile. – Roberta X in a comment to her own post, Manners, Customs, Anarchy and Me

It would appear that she has the same problem with Billy Beck’s prickly personality that I do.

. . . that the creator of the comic strip xkcd isn’t an Obama fan: 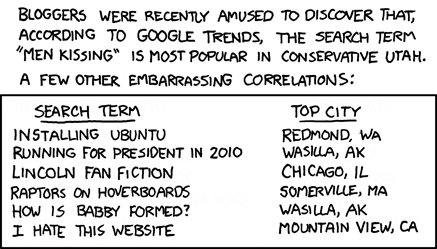 It’s been done before, but I love this expression:

. . . a sudden and acute failure of the victim selection process. – Massad Ayoob, An urban gunfighter: The lessons of Lance Thomas

There was also this quote from Col. Cooper:

“It is not unusual for critics of the American scene to deplore what they hold to be an uncivilized toleration of personal violence in our society,” Jeff Cooper once wrote. “Violent crime is not so much the issue, but rather the use of violence by socially acceptable persons in self-defense, in the righting of wrongs, and in meeting challenging situations. Such critics feel that Americans are too ready to ignore the police and handle their emergencies personally; and that, further, this barbarous attitude is encouraged, rather than inhibited, by our tradition.”

Some time back in the Dangerous Victims trilogy I wrote:

(The) recognition of the difference between violent and predatory and violent but protective illustrates the difference in worldview between people like me, and the (we’ll call it) pacifist culture.

Britain today represents a perfect example of the pacifist culture in control, because that culture doesn’t really distinguish between violent and predatory and violent but protective – it sees only violent. Their worldview is divided between violent and non-violent, or passive. There is an exception, a logical disconnect if you will, that allows for legitimate violence – but only if that violence is committed by sanctioned officials of the State. And even there, there is ambivalence. If violence is committed by an individual there is another dichotomy: If the violence is committed by a predator, it is the fault of society in not meeting that predator’s needs. The predator is the creation of the society, and is not responsible for the violence. He merely needs to be “cured” of his ailment. If violence is committed by a defender, it is a failure of the defender to adhere to the tenets of the pacifist society. It is the defender who is at fault because he has lived by the rules and has chosen to break them, and who must therefore be punished for his transgression.

It’s nice to know I was channelling the Colonel.

Merry Christmas To All

Well, I’m back home for a few days. I don’t have to be back on site until January 5, thankfully, but then it’s crunch time, and I don’t know if I’ll have any free time at all until the end of the month. I certainly hope so, because on Sunday, February 1 I’m scheduled to appear on LibertyWatch Radio here in Southern Arizona at 1:00PM MST during the “America Armed & Free” segment. Host Charles Heller will be interviewing me about gunblogs and gunblogging. You can tune in via the internet at http://kvoi.com/listenlive.php

I’ve got a lot to catch up on, not the least of which is my reading. One oversight I want to fix right now: Carnaby Fudge, aka Ben, has taken up a side business of providing stainless 6.8SPC barrels for AR-15 rifles. He liked his K0-Tonics barrel so much, he bought the company! Or something. So if you’re interested in one, he’s the man to talk to.

I’m hoping to get a few posts written during the next ten days or so, but don’t expect anything out of me during January. (Dammit.) I like to say that I do this not for you, but for me, and it’s true. I blog because, for some reason, I need to. It’s a bitch when I can’t.

Ah well, on a lighter note, here’s a lovely video Christmas Card for you to finish this post:

Y’all have a good one!

Ramirez is Still Rollin’ ‘Em Out

And the latest one, now that Congress has given itself a pay raise in the wake of the stellar work its members have performed recently:

I’m telling you, Mike Ramirez is a national treasure.

(Government) is an instrument of force and coercion. And there can never be an instrument of force and coercion which will consciously restrain itself. It must be restrained. Yet there is no tool capable of such restraint. For any type of tool, whatever its nature, which is allegedly formed to restrain and contain government, would, by its own nature, simply become a government’s government.

But the thing all member governments desire to do is to rule their own people and to collect money from them. This is inherent in their natures. So the United Nations, perforce, will aid and abet the member governments in their universal desire to maintain a coercive hold over their individual subjects.

I, too, have always liked Professor Bernardo De La Paz’s explanation of his political affiliation of “Rational Anarchist.”

I decided to tune into the Star Tribune’s coverage of the deliberations of the Minnesota Canvassing Board in the Coleman-Franken recount. It is a strangely compelling artifact of representative democracy, but my observation is this: Al Franken’s supporters display a bewildering inability to fill in bubbles.

I have long felt that some sort of familiarity with the mechanisms of American government should be required of electors. I support a policy that rejects the ballots of any voter incapable of filling the ballot in correctly, as a minimal test of electoral competence. – Jackalope Pursuivant, Counting to 1

Al Franken now leads Coleman by 262 votes. It would appear that every single mis- or un-counted vote went Franken’s way. What are the odds of that?

Hugh Hewitt was right – If It’s Not Close, They Can’t Cheat.

“I still believe in bipartisanship,” Senate President Pro Tem Darrell Steinberg (D-Sacramento) said at a Capitol news conference. “But there is an even greater responsibility than practicing bipartisanship, and that is to govern. And that is what we intend to do here today.” – LA Times: California Democrats devise plan to hike taxes

“In every generation, there are those who want to rule well – but they mean to rule.” – Daniel Webster