OK, I’m backlogged. I have another essay on Rights that I owe people from a couple of weeks ago. I’ve started it, but it looks like another überpost, and those take a bit. Markadelphia has returned, once again wrapped in his blanket of “I’m not, you are!” I owe HIM a response to something from quite a while back, but that’s not gonna happen until after the Rights piece.

I’m buried at work, and I’m supposed to go on vacation starting Labor Day weekend, but it now looks like I’ll be tied up for a day or two on an emergency project before leaving for Gun Blogger Rendezvous VII on Thursday of next week – and if you think I’ll be doing any non-GBR related posting over THAT weekend, you’ve got another think coming. Over Labor Day and the days leading up to leaving I WAS going to finish painting the exterior of my house. I still hope to get to that. Blogging will, of course, suffer.

Somewhere in there I need to load some more ammo for the trip, get all my stuff put together and in the same place.

TL;DR version: Don’t expect much out of me for a week or three.

This was in my inbox when I returned from lunch today:

I found your blog earlier today by accident, and have enjoyed the ensuing perusal. I wanted to add a smidgen of perspective to your already-comprehensive discussions.

I am Canadian, a long-time shooter, and a student of history. I have extensive knowledge of the anti-gun machinations of my own government, beginning with the FAC program incept in 1978.

During the implementation process of our gun control measures, the plan was at every step argued against by well-reasoned, rational, calm, logical and effortlessly sensible persons who took great pains to carefully explain why further gun control measures were worthless and most certainly would not achieve the results being sold to the general public as their justification.

It eventually dawned on me, as I watched the government repeatedly ignore these eminently commonsensical explanations and forge ahead with complete disregard for logic, that the whole thing wasn’t about what was logical or rational. It was about what the government wanted to do. End of story.

I determined then that when governments do things that make no sense and fly in the face of logic that even an utter simpleton could comprehend, it does not mean that senses have been taken complete leave of. It simply means that there are portions of the operative agenda that you have not, for whatever reason, been made privy to.

Gun control is not, and never has been, about what is logical or reasonable. It is far worse than that, because what remains after removing those two as potential justifiers, must be the truth…….

Yours Most Respectfully,
Michael D Young
Ontario, CANADA
…and I would’ve gotten away with it, too, if it weren’t for those meddling kids…

Hear, hear for us meddling kids!

Got that one from my brother in email tonight.  Kinda reminds me of this one:

In other news, Dinesh D’Souza’s new film 2016:  Obama’s America is apparently going to be #3 at the box office this week, even though it is in limited release, and it’s gaining in per-theater ticket sales with each successive week.  I didn’t realize it had opened here in Tucson this weekend.  I’ll have to catch it soon.  This is one I won’t mind paying full-price to see.

There’s no question that American businesses are sitting on tons of money. There’s an enormous amount of private capital out there waiting to be spent, and they’re not spending it, and rightfully so. They’re not spending it because these Marxists in Washington have demonized business, demonized prosperity, demonized success, so rightfully and sensibly companies are not spending money. They’re not hiring people or buying new trucks or opening factories because they don’t know what the tax rate is. They haven’t even passed a budget in three years! They can’t predict it.

Then (viewer) Jeremy’s made this point – he’s said that it’s better to have a high tax rate that we know is coming than it is to have an unknowable tax rate, because businesses have to plan ahead. So if Ryan and Romney, Romney and Ryan, are elected in November, I predict the Dow’s going to jump five thousand points overnight, and before he’s inagurated the economy’s going to be up four, five, six percent in growth because of this.

Of course, needless to say, all the liberals will say it’s racism and Obama has already gone on record saying he doesn’t want Romney elected because Romney’s gonna get credit for the economic recovery which is going to be here just any minute. So if Romney is elected and the Dow jumps five thousand points the next day, and everybody starts hiring, Obama’s woulda said, “Man, if that election woulda only happened a week later, I woulda won!”

Neil Armstrong, first human being to set foot on the lunar surface has died of complications following heart surgery. He was 82 years old. Jerry Pournelle, scientist and author, and only three years his junior has today’s Quote of the Day:

I turned 50 this year. I was seven years old when Neil Armstrong left his first bootprint in the lunar dust. I was 10 when Eugene Cernan left the last bootprint there.  I hope that before I pass, I’ll get to see another human being walk on the surface of the moon.

But I’m not holding my breath.

That link also ties to this extremely sad and appropriate XKCD ‘toon: 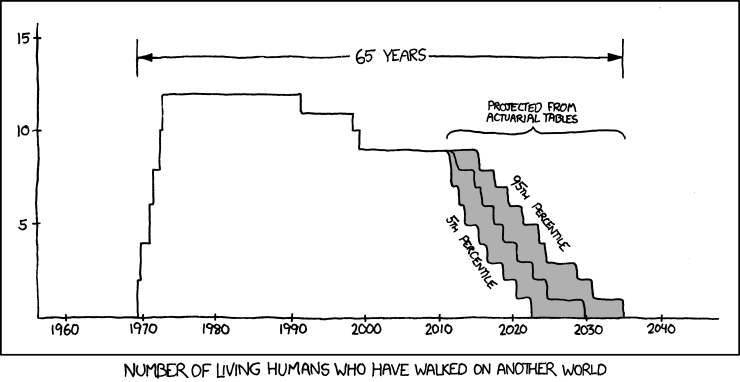 The Thomas Sowell excerpt is seven minutes, the Caroline Glick piece is 50 minutes.  Both are absolutely worth your time.

Hope to see you there!

Essentially central planning is not about the efficient allocation of economic resources, it is about control.

Central planning maximizes the extent of control that the state, and the people running the state, exercise. The desire to control others is a constant in history and is part and parcel of the construction of states. If the state can grab all the land and resources and control who and on what terms people get access to them, then this maximizes control, even if it sacrifices economic efficiency.

Why Central Planning? from the Why Nations Fail blog.

And our current system of .gov doesn’t have to be socialist to still be all for central planning. Read The Church of the MSM and the New Reformation, if you haven’t already.

I think I’ve got another book to read.

I serve as a a blank screen on which people of vastly different political stripes project their own views.

— Barack Obama, The Audacity of Hope

I think that screen is fully illuminated now, but I had to post a photo of the Teleprompter of the United States (TOTUS).

…is that he came right out and said it.

Former union boss at Occupy event: Our goal is to ‘overthrow the capitalist system and build communism’

“Its objective,” he added, “is to make revolution in the United States, overthrow the capitalist system and build communism.”

[youtube https://www.youtube.com/watch?v=sBVT6JhWGfQ?rel=0]
Now, go back and watch the Yuri Bezmenov video from 1984.

Forget the source, listen to his words.

I remember when we had a President that tore down walls to advance independence rather than tearing down the successful to advance dependence. — In Jennifer’s Head, I Thought That Sounded Familiar