No, not 2016 – if you read this blog you probably already know everything Dinesh D’Souza had to say in that one.  No, the film I want to recommend to you today is also a documentary, but it’s not about politics, it’s about a lot of other things – education looming largely among them.  It’s Thunder Soul, a 2010 documentary about the Kashmere High School Stage Band: 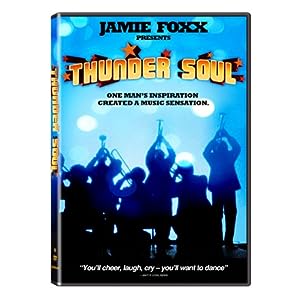 Largely, it’s about Conrad O. “Prof” Johnson, the music director of Houston, Texas’s Kashmere High School from the late 60’s until 1978, and the effect he had on the kids he helped educate. From an Amazon review:

The action which forms the core of the film takes place in 2008 when a couple of band alumni from the 1971-4 period – just before Prof retired – decide to find all the old band members – now scattered around the country, with most having not lifted their instruments in years – and hold a “reunion concert” for the then 93 year old teacher. We watch as they come together and practice for the “big night”. Director Mark Landesman interviews Prof in these later years but also incorporates clips from a 1974 documentary on the band titled “Prof & the Band”.

The documentary is available from Netflix streaming.

Watch this documentary, pay attention to what “Prof” has to say, and what his students have to say about him, and ask yourself how we went from that in the turbulent early 1970’s to what we have today.