If you haven’t been following this story, Bishop O’Brien of the Phoenix, AZ diocese made a deal with Maricopa County Attorney Rick Romley to admit that he’d sheltered priests who had sexually abused parishioners. Worse than that, it appears that Phoenix was made the dumping-ground for “troubled priests” as Boston’s Cardinal Law (no saint, himself) considered Phoenix a diocese “with policies that are less restrictive than ours.” Then, O’Brien backpedaled on his statement.

Then O’Brien was involved in a fatal hit-and-run accident. He is now the first Bishop to have felony charges pressed against him.

Frank Keating, former governor of Oklahoma and a member of an investigative board examining the breadth and scope of sexually abusive priests in the Catholic church was recently forced to resigned from the board after he “compared the Catholic Church’s instinct for secrecy to that of La Cosa Nostra.”

Chuck Asay, once again, hits the nail on the head: 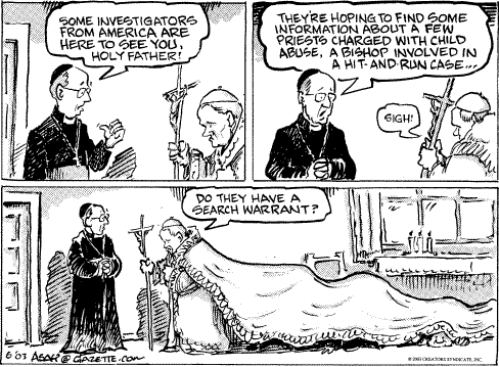