The organization Doctors Against Handgun Injury has produced a pamphlet that YOUR doctor can give you to help you recognize the dangers of keeping a firearm in your home. It’s an Adobe Acrobat PDF file, entitled Is Your Family Safe? It’s a two-page tri-fold, made up of little soundbite-sized blurbs of statistics and recommendations. Mixed in with a little reasonably good advice, is a lot of (I believe) intentionally misleading statistics, which I will illustrate here. I’m not going to quote the whole thing, just selected parts.

Why having a gun in the home is a problem

Well! Let’s just start off with a blatent assertion! We’re doctors, after all, and the only difference between a doctor and God is that God doesn’t believe he’s a doctor!

Doctors treat the victims of gun violence every day. We want to reduce the number of deaths and injuries and prevent you and your family from being a statistic.

While suicidal thoughts may be fairly constant, the decision to act on those thoughts is usually brief – often fading within just a few seconds or minutes. If a gun is available, that is enough time for thought to turn to action.

Ah, yes, the “guns are the cause of suicide” argument. Except they don’t tell you some other interesting information. Yes indeed, according to CDC statistics 16,599 Americans did kill themselves with firearms in 1999. Another 12,764 killed themselves by other means. The total number of suicides was 29,350, and the rate per 100,000 population was 10.66.

That puts the United States, with its 200,000,000+ firearms, over 65 MILLION of which are handguns firmly in the MIDDLE OF THE PACK for suicide internationally. If firearms actually cause suicide, then our population should have offed itself a few generations ago. Let’s look at some comparitives, shall we?

Japan, a nation with a population of about 126,600,000 in 1999, a little less than half our own, suffered 31,385 suicides – a rate of 24.8 per hundred thousand population. And there are essentially NO privately owned firearms in Japan. Even Japanese police officers leave their firearms at work when they go home. The Japanese kill themselves by asphyxiation (either by hanging or car exhaust) or by jumping off of buildings or in front of moving trains. To be fair, Japan’s suicide rates have skyrocketed with their recent economic downturn (it would appear that a bad economy represents a much higher risk of suicide than individual ownership of a firearm.) On average, the suicide rate in Japan has run at about 17 per 100,000. Considerably higher than the U.S. but not more than double.

According to this table, in 1997 of the eleven countries with the top per capita Gross National Products (the US ranks in the middle), the US has the second lowest suicide rate. Only the Netherlands was lower. See the chart: 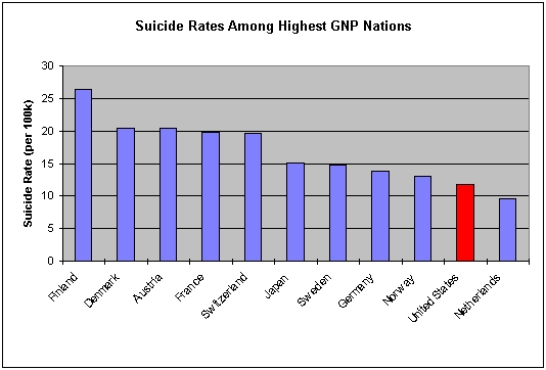 Yup. All those guns CAUSE suicide. But the pamphlet reinforces this claim:

The source of this assertion? “Suicide in the Home in Relation to Gun Ownership” from the New England Journal of Medicine, August 13, 1992. Primary author? Dr. Arthur Kellermann of Emory University, and staunch defender of thorougly discredited history professor Michael Bellisiles. They were, after all, both professors at Emory, and they are both apparently practicing deliberate mendacity when it comes to firearms statistics.

Dr. Kellermann is also the source of the “43 to 1” claim of guns in the home being more deadly to the occupants than to criminals. The organization Jews for the Preservation of Firearm Ownership (an admittedly biased group) produced this excellent piece: Disarming the Data Doctors: How to Debunk the “Public Health” Basis for “Gun Control” where it disassembled that “study.” Kellermann’s biased research resulted in Congress pulling $2.6 million from the CDC’s budget in 1997 – precisely the amount the CDC had spent on the National Centers for Injury Prevention and Control research into gun-related injury – because of blatant bias in their research. This article by Dr. Miguel Faria on that topic is worth the read. Dr. Faria is Editor-Emeritus of The Medical Sentinel of the American Association of Physicians and Surgeons, and a neurosurgeon. This piece entitled “Guns in the Medical Literature – A Failure of Peer Review” by Dr. Edgar A. Suter of the Doctors for Integrity in Research & Public Policy is also a good one.

Pardon me if I take Dr. Kellermann’s statistics with a grain pound of salt. I wish everyone would, but with government funding and backing from the CDC and journals such as the NEJM, his numbers are the ones repeated in citation after citation as “fact.”

THIS is the part that REALLY CHAPS MY ASS. Indeed, in 1999 the CDC reports that there were 824 unintentional firearms deaths in the U.S., but associated with this fact comes the line

Research shows that educational programs designed to teach children not to touch guns do not work. If kids find guns, they usually play with them. Such play can quickly turn deadly.

And right next to it, this picture of a toddler reaching into a dresser drawer: 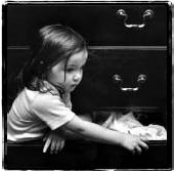 Now, what are you to infer from this? That the overwhelming majority of those 824 accidental deaths were that of very young children, no? This is pure propaganda, and it’s propaganda that works, as illustrated by my favorite reference, Jean Hanff Korelitz’s Salon.com piece “What a few good women can do” from March of 2000:

And what about the more than 4,000 children who die in gun-related accidents each year? That’s 11 kids a day. And we’re not talking about crimes, or intentional shootings. We’re talking — or not talking enough — about accidents.

Let’s look at the facts, as unpleasant as they actually are. In 1999, as the piece says, 824 accidental deaths by gunshot were recorded. But how many of these were children? If you define it as I do as “under the age of 18” then the total number of “children” who died by accidental gunshot wound was 158. If you mean small children, such as the one in the picture – say, under the age of 10? 31. Not 4,000. Not 824. Thirty-one.

But we’re told endlessly that they’re no longer interested in gun-control any more, but now it’s gun-safety they pursue. I’m sorry, but guns are apparently safer than water or bicycles, at least for small children.

Guns kept in the home can threaten the health and safety of the family, especially if they are not stored securely.

Again, the intention to mislead. Firearms ARE the second leading cause of death among adolescents and young adults. Between the ages of 15 and 24, it isn’t accidental death, it’s homicide. “Safe storage” doesn’t have any effect on that. The third leading cause of death in that age group is suicide, and hopefully I’ve already covered that topic in sufficient detail.

Now, is it a “gun storage” problem, or is it something else?

• For every time a gun in the home is used in self-defense, there are 22 criminal, unintentional or intentional self-inflicted shootings

The data suggest that the risks of a gun in the home, especially a handgun, outweigh any benefits.

Source? “Injuries and Deaths due to Firearms in the Home,” Journal of Trauma, 1998. Author? Dr. Kellermann again. You think they’d try and find someone else just to be a bit more broad, but you’ll notice in the pamphlet that they don’t tell you who the author is, just the prestigious journal the “statistic” was published in. This is toned down from his “43 times more likely” claim, but only barely.

Now I ask you, given the statistics provided by the CDC itself, do you think “guns in the home” are the problem?

(Extensive use of the CDC WISQARS tools were used to compile the data in this post.)