Kevin Parrot details his personal history with the lying Mr. Wright, with illustrations. Like this one: 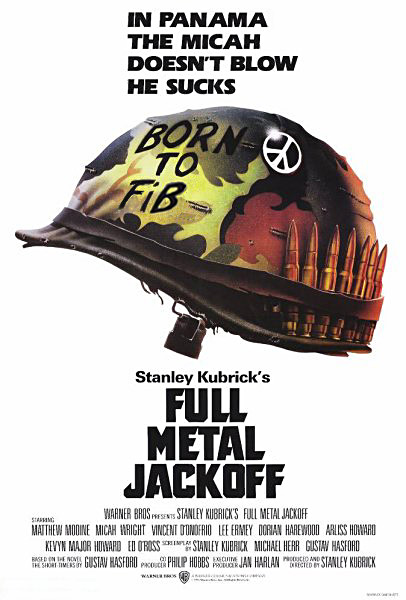 Read the whole thing, but here’s the kicker:

So, what’s going to happen to Micah Wright now, you ask?

As a matter of fact, I think Micah Wright will end up getting more work and making more money off his lies than before they were discovered.

And that’s the second reason I almost didn’t write this. I have the feeling Micah Wright already knows what I just stated, and is eating up every minute of what’s been going on. Micah wins.

Oh, sure, his new book of remixed WWII posters has been cancelled (for now), but no one I’ve read on the Net seems to have picked up on the hidden message in this sentence from the Seven Stories website:

The author’s introduction will be removed from any future printings of YOU BACK THE ATTACK.

and again, from the Washington Post article which exposed him:

It also will remove from future printings of the first book his detailed and wholly fictional account of parachuting into Panama under fire during Operation Just Cause.

Instead of leaving in the lie, and providing some extra editorial commentary to place the incident in proper context, they’re going to make it disappear. Just like it never happened at all.

Everyone loves and rewards a liar, it seems. Jayson Blair got a book contract; Stephen Glass got a book contract and ended up being played by Young Darth Vader on the silver screen. What will Micah get? Well, I’d be very surprised if one of the comic companies out there hadn’t already contacted him about writing a Graphic Novel or a Mini Series based on this event

Micah Wright passed himself off as an ex-Ranger, an organization built around the concepts of honor, duty, country.

Our nation seems no longer to recognize the ideal of honor, in its definition of “a keen sense of ethical conduct.” There is no public censure of dishonorable acts. The concept of shame is nonexistent. Bad behavior is rewarded. Infamy is equivalent to fame. Disgrace is treated as grace. Do something objectionable? That draws attention, and attention draws dollars. Besides, its always someone else’s fault, anyway. Victimizer as victim.

Moral equivalence at its worst.