From his Townhall piece, The Role of Educators:

Schools were once thought of as places where a society’s knowledge and experience were passed on to the younger generation. But, about a hundred years ago, Professor John Dewey of Columbia University came up with a very different conception of education — one that has spread through American schools of education, and even influenced education in countries overseas.

John Dewey saw the role of the teacher, not as a transmitter of a society’s culture to the young, but as an agent of change — someone strategically placed, with an opportunity to condition students to want a different kind of society.

A century later, we are seeing schools across America indoctrinating students to believe in all sorts of politically correct notions. The history that is taught in too many of our schools is a history that emphasizes everything that has gone bad, or can be made to look bad, in America — and that gives little, if any, attention to the great achievements of this country.

If you think that is an exaggeration, get a copy of “A People’s History of the United States” by Howard Zinn and read it. As someone who used to read translations of official Communist newspapers in the days of the Soviet Union, I know that those papers’ attempts to degrade the United States did not sink quite as low as Howard Zinn’s book.

That book has sold millions of copies, poisoning the minds of millions of students in schools and colleges against their own country. But this book is one of many things that enable teachers to think of themselves as “agents of change,” without having the slightest accountability for whether that change turns out to be for the better or for the worse — or, indeed, utterly catastrophic.

A People’s History has even made inroads into popular culture. I wonder how many books that clip sold?
“Agents of Change” explains things like The George Orwell Daycare Center, too.

Here’s another little example, a worksheet from a fifth-grade Scholastic Teaching Resources mathematics workbook on the distributive property of multiplication. Check the graphic: 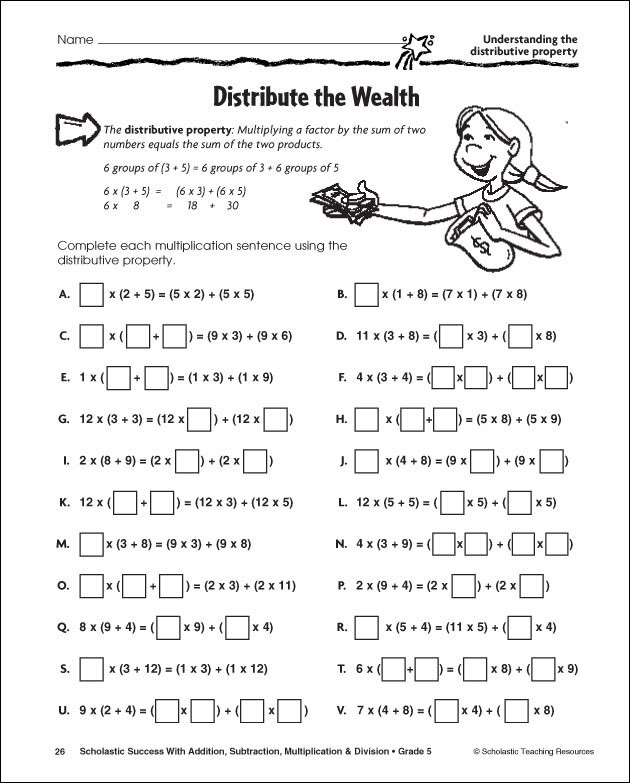 Tell me, what does “distributing the wealth” have to do with the distributive property?