And apparently two is none, if you don’t check adequately first.

So as reported I’ve been on my way to Boomershoot.  I departed from my hotel in Brigham City at 07:00 local time (06:00 Pacific Standard Time), and Google Maps, being a bi%$h, routed me through the tiny Idaho burg of Weiser (pronounced Weezer).  Just outside of Weiser, this happened: 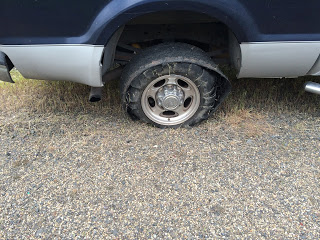 I’d had (I thought) all the tires checked for proper inflation on Wednesday before I left, but apparently I hit some road debris and that was that. No warning until the tire just let go. So, off on the shoulder I jack up the truck and pull the bad one off, then I drop the (supposed) spare from under the bed: 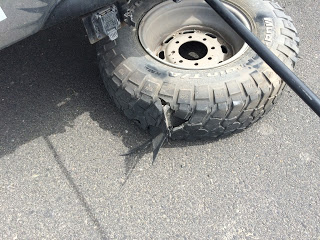 FML. At least I had cell service. I called State Farm for roadside assistance. Took half an hour to get them to figure out where I was and dispatch a tow truck. Text message said they’d be about 90 minutes out. Wonderful.

Then a local Sheriff’s deputy pulled in behind me, scoped out the situation, and offered to take me and my tire back into Weiser to the closest tire shop. I cancelled the tow, and off we went. Two hours, two tires and $470 later, the new spare is the old driver’s side rear, and I have a new set of Cooper tires on the back axle: 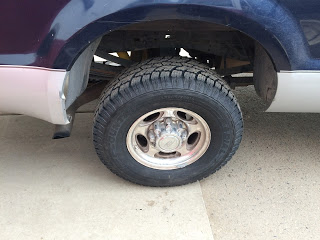 Finally got into Orofino about 5:45 Pacific time, but I’m ready for Boomershoot now!