Over at Quora, I answered the question “What do most Americans fundamentally misunderstand about the U.S. Constitution?“

That the purpose of the Constitution is to establish the rules under which the Federal government is constructed, and that those rules are designed, as George Will once observed:

When James Madison and fifty-four other geniuses went to Philadelphia in the sweltering summer of 1787, they did not go there to design an efficient government, the idea would have horrified them. They wanted a safe government to which end they filled it with blocking mechanisms. Three branches of government. Two branches of the legislative branch. Veto. Veto override. Supermajorities. Judicial review. And yet I can think of nothing the American people have wanted intensely and protractedly that they did not eventually get.

The world understands. A world most of whose people live under governments they wish were capable of gridlock, that we always have more to fear from government speed than government tardiness.

The very virtue of a constitution is that it is not changeable. It exists to prevent change, to embed certain rights so that they cannot easily be taken away.

And we get this: 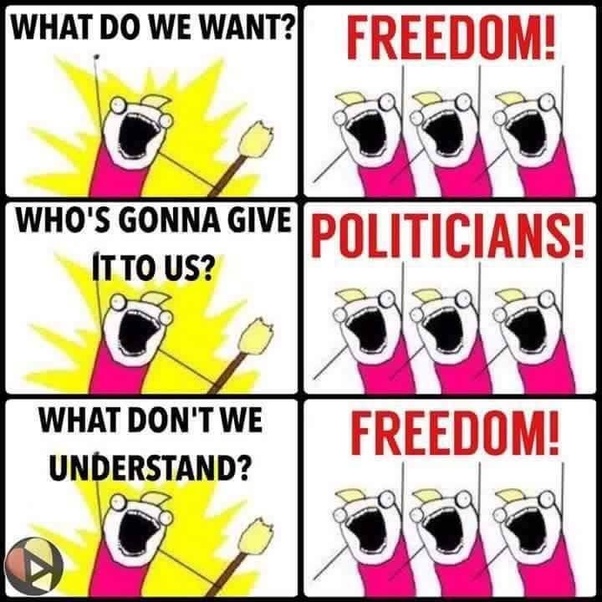 In the comments I had several exchanges with someone who is so far left I can’t even grasp it.  Here’s one:

Bhuvanesh Bhatt
“The reason that almost all “improvements” make matters worse is that most new ideas are false.”

Kevin Baker
I was quoting George Will, but in answer to your question let me recommend to you a couple of excellent books on the topic, The Burden of Bad Ideas, and Intellectuals and Society

Don Tracy
Honestly, I have never found any conservative ideology to even be readable. I would not waste my time on any proclaimed conservative because they write in a mysterious religious tone that is baffling to anyone used to rational discourse.

Kevin Baker
Translated: “There’s no talking to The Other Side™, because their philosophy is not understandable by my side of the aisle.” That way lies physical conflict.

Kevin Baker
You’re falsely attributing to “the Republican/Conservative coalition” the beliefs of “murderous racists in Charlottsville” who are a tiny minority of the population.That’s called “Othering,” a necessary precursor to dehumanizing your opposition. Once they’re not humans, well then you needn’t regard their rights.

Don Tracy
You totally miss the point. The conservatives have never condemned the racist behavior and some actually blame the “non-conservatives” for instigating the trouble. I understand you truly believe in the “cause” but what gives you the right to be so twisted?

Kevin Baker
“Face it, non-conservatives are committed to respecting all people and their arguments with the expectation that they will play fair.”

Yeah, right. You’ve exhibited just that in this comment thread (not).

Don Tracy
I fully support and even believe in Antifa. They are freedom fighters.

Don Tracy
It is valid opposition. Trash can fires are a great way to get your attention.
As for different sides, I think you made a choice out of ignorance. If you would investigate with an open mind then you would have to agree with Antifa. Childish fear should never be part of decision making.

Don Tracy
It is still valid opposition and required to expose and castigate the un-American fascists leading our nation at all of our expense for their profit.

Kevin Baker
So you endorse their violence. Check.

Don Tracy
The violence is only in your imagination.

Kevin Baker
No, it’s reported in the media – which I’m sure you believe is right-wing. But I can point you to the people arrested at the Berkeley event as reported by the police there. Who’s ignoring reality now?

Don Tracy
That’s true – the media is entirely biased for the right wing. I don’t need it.

We live in entirely separate realities.