Skip to content
I have previously written about the ineffectiveness of the Brady Background Check law, that supposedly “stops” prohibited persons from purchasing a firearm from a federally licensed dealer, but then doesn’t prosecute the prohibited person for signing a confession (BATFE Form 4473) that should get them five years in Club Fed.
But I’m not against the idea of background checks per se. What I am against is the requirement that ALL interpersonal “transfers” of firearms must be run through such a background check – the so-called “gun show loophole” that isn’t a “loophole” at all. Why? Well if I want to give a gun to my grandson, background check. My wife buys me a rifle for Father’s day? Background check when she buys it, background check when she gives it to me. And I already own several firearms. Duh. The recently passed “universal background check” law in Washington was so poorly written that if you left your firearm at home with a loved one and they had access to it, it COULD BE interpreted as an illegal transfer. But, we are assured that the law will NEVER be abused like that…. Go ahead, pull my other leg.
I live in Arizona, where if you have an Arizona CCW permit, you don’t have to have a background check run on you when you purchase a firearm. You undergo a very thorough check before the permit is issued. Fill out form 4473, sign it, show your permit and your ID, get your gun.
Everything you do in the U.S. (with the notable exception of VOTING) requires a state-issued photo ID.
Anyway, you get the point. So here’s my suggestion:
Everybody who needs a state-issued ID gets a background check and a new ID. If you are a prohibited person, somewhere on that ID will be this symbol: 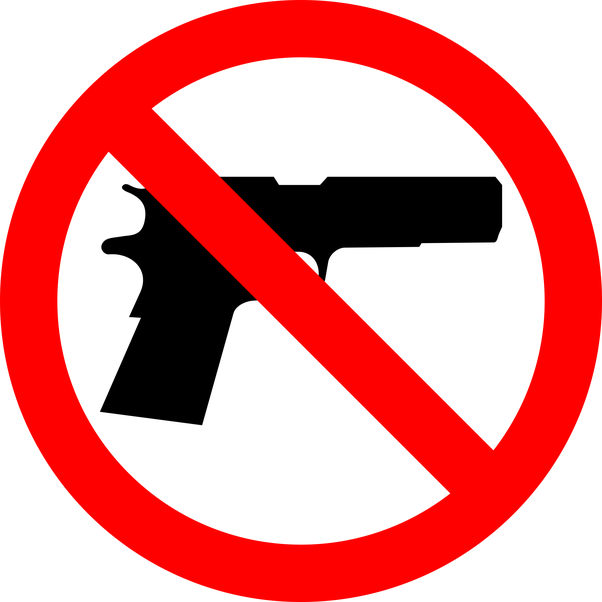 If you’re not prohibited, you get a green circle (don’t want to trigger the sensitive by putting an icky gun on their ID). Everyone that already has a driver’s license or a state-issued photo ID gets a new one with one of the two symbols. Any new IDs issued, the applicant gets the background check.
You want to buy a gun, whether from an individual or a FFL dealer? Show your ID. If the red symbol is on it, no sale. If NO symbol is on it, no sale. If you don’t have ID, no sale. If you do something that makes you a prohibited person, you must turn in your ID for one that has the red symbol. If you don’t, five years in Club Fed on top of whatever sentence you got for the crime that disqualified you.
The state can’t build a database of gun owners, and everybody who wants to buy a gun gets a background check. That’s what I call “compromise.”
It’ll cost a lot of money and won’t prevent any crimes, but that’s what “gun control” usually does. But hey, we’re DOING SOMETHING!!