Nod to AR15.com for the story.

Rap entrepreneur Master P has been busted at Newark Airport with six hollow-point bullets, the deadly and illegal ammo known on the streets as “cop-killers.”

Like hell they are. They might be known as “perp-killers” because they’re carried by damned near every police officer in America, and by most people with defensive handguns in the rest of America. “Cop-Killer” bullets, you moron, are the nearly apocryphal “armor-piercing” ammunition that hollow-points most definitely are not.

The Louisiana-based hip-hop star and record executive, 36, whose real name is Percy Miller, was due to board an America West flight to Los Angeles late Tuesday when he was stopped by Transport Security Administration agents.

Law-enforcement sources said the “gangsta rapper” told guards he was checking a small case which held a licensed, unloaded handgun. Officials found the six bullets in a separate magazine.

Possession of the deadly ammo is a third-degree felony in New Jersey – with probation for conviction on a first offense and up to 18 months in prison for a subsequent conviction.

Not quite. New Jersey law says this:

f. Dum-dum or body armor penetrating bullets. (1) Any person, other than a law enforcement officer or persons engaged in activities pursuant to subsection f. of N.J.S.2C:39-6, who knowingly has in his possession any hollow nose or dum-dum bullet, or (2) any person, other than a collector of firearms or ammunition as curios or relics as defined in Title 18, United States Code, section 921 (a) (13) and has in his possession a valid Collector of Curios and Relics License issued by the Bureau of Alcohol, Tobacco and Firearms, who knowingly has in his possession any body armor breaching or penetrating ammunition, which means: (a) ammunition primarily designed for use in a handgun, and (b) which is comprised of a bullet whose core or jacket, if the jacket is thicker than.025 of an inch, is made of tungsten carbide, or hard bronze, or other material which is harder than a rating of 72 or greater on the Rockwell B. Hardness Scale, and (c) is therefore capable of breaching or penetrating body armor, is guilty of a crime of the fourth degree. For purposes of this section, a collector may possess not more than three examples of each distinctive variation of the ammunition described above. A distinctive variation includes a different head stamp, composition, design, or color.

So, is it illegal to possess hollowpoints or not? And just where was this guy going with his licensed, cased pistol? The story continues:

The bust came three months after an aspiring rap producer was sentenced to a year in jail for stalking the platinum-selling Miller.

Antwan Baker, 32, was ordered to stay away from the record mogul for the next 10 years after first accosting him at Chicago’s O’Hare Airport.

Sources said yesterday they believed that Miller had bought the gun in Louisiana and that it was properly registered.

So he’s been threatened and has a licensed handgun for self-defense with bullets that are kinda, sorta maybe illegal in Jersey?

Port Authority cops questioned the rapper, then arrested him for having the bullets. He was taken to Union County Jail in Elizabeth, issued a summons and released.

The controversial bullets, also known as “dum-dums,” are designed to mushroom on impact and to cause a maximum of serious physical injury and pain to the target.

The bullets also are outlawed in New York and their use is prohibited in warfare by international treaties.

Not quite right. They’re outlawed for mere peons to have, but the Police carry them because they’re the most effective handgun ammunition you can use. According to this site the NYPD has used the Speer 9mm 124 grain +P Gold Dot Hollowpoint as its issue ammo since 1999. 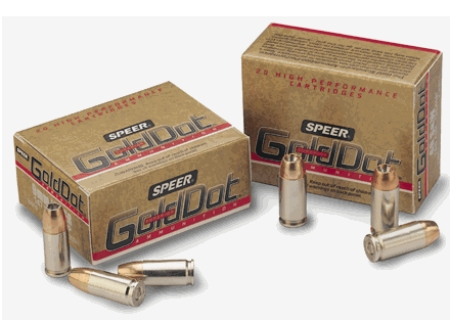 “Dum-dums.” Nobody’s called them that since the 60’s. Why can’t reporters spend ten minutes and gather FACTS? (At least he called it a “magazine” and not a “clip.”)