Nod to Acidman for the pointer.

A business owner in Phoenix, Arizona took matters into his own hands after a group of men robbed his business, according to a Local 6 News report.

Police say three armed suspects walked into the Mr. Insurance building in Phoenix and demanded money. A fourth suspect was in the getaway car, according to the report.

Police said that the man, identified only as Peter, followed the suspects through a neighborhood and eventually caught up with them. He then rolled his Hummer over their car.

Two of the suspects were taken to the hospital in critical condition.

The two other suspects managed to get away but police later caught them as well.

I don’t think he can claim self-defense here. The attached poll is running 85% against charging him, though. I’d like to be on that grand jury.

Man, the Hummer did a job on that car. 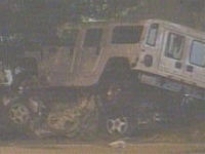