MSNBC weighs in on Missouri’s renewed attempt to join the majority of the nation in “shall-issue” concealed-carry legislation. So of course we get to read things like this:

The bill’s champions say that allowing concealed weapons could make things safer because criminals would have second thoughts about holding up a store where other customers and maybe even the clerk are packing. Opponents, on the other hand, foresee a Wild West mentality and warn against the increased presence of firearms in the workplace.

Right. The “No Guns Allowed” signs do such a marvelous job of keeping crazed killers out.

“The fact that concealed weapons are currently outlawed in Missouri creates an incentive for businesses looking to expand or relocate in Missouri by increasing safety in the workplace,” said Kristi Wyatt, senior vice president for government relations.

Riiiiight. How, exactly does not allowing law-abiding citizens to carry a firearm “increase workplace safety?” Time for another cartoon: 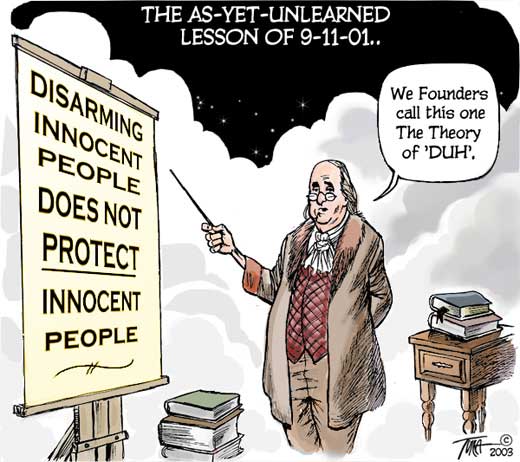 (Kevin Tuma) The article isn’t completely anti-gun, but I am constantly amazed by gun-bancontrol supporters repeated use of “Wild West” and “blood in the streets” arguments when it has been proved conclusively by over thirty other states that this never happens. See “Cognitive Dissonance” below.