As you may know, I frequent Quora.com. Recently someone asked the question:

What are the great ideas of progressivism distinct from liberalism?

This answer by Charles Tips is one of the best, most concise responses I’ve ever read, and I asked him if I could archive it here on my blog.

All of progressivism is distinct from liberalism. It rests on an idea I hesitate to call great, but which certainly has been workable. And that idea depends on a number of ancillary ideas and methods.

The modern reordering of politics

Monarchism enjoyed a long run of more than two millennia before being beset in short order by three new politics: Liberalism kicked in in the late 17th century. Bonapartism commenced in the early 19th century followed by Marxist socialism in the mid-19th century.

It was a rough time to be a monarch or aristocrat, institutions propped up only by myth (some are made of better stuff and are more beloved of God), militia (the finest knucklebreakers money can buy) and corruption (we give ourselves titles, offices and land; you can barely survive without paying us). If Napoleon wasn’t running roughshod over your turf exposing you as not so hearty as you claimed, Old Karl was filling your subjects ears with nonsense about class-free society.

But the real kicker was liberalism, which, with its economics of productivity, stood as a rival power center. When Richard Arkwright, a poor tailor’s son, died near the end of the 18th century worth half a million pounds from his inventiveness and enterprise, it sent shock waves through all of European society. The reverberation was especially strong in the courts of kings—scientists and tinkerers and commercial men now had an engine that could produce real wealth and offer useful employment to our subjects!

The gentry had laughed up their sleeves at the very notion of the United States of America—a class-free society… with no titles of nobility… with subjects made full citizens… and the leaders of government construed as public servants!!?? Preposterous! But it kept succeeding—not preposterous but prosperous.

Napoleon came and went, and his nephew was not the adroit he was. Socialism threatened wide-scale revolution then went quiet. But liberalism had bestowed commoners with the goose that lays golden eggs. What were thinking layabout sycophants to do? And then the United States threatened to split in two. Maybe liberalism was a dead end.

Monarchy rallied and soon King Wilhelm I charged Prince Otto von Bismarck to go out and get the many German principalities and duchies to submit to his rule. He needed an incentive, and the strongest appeal to the masses was socialism. He decided to explore and so had a famous series of private meetings with Ferdinand Lassalle, leader of an early social democratic party (that being the name communists had had to resort to in order to get around sedition laws).

Bismarck soon concluded, by God, this man is every bit the monarchist I am, just for the House of Lassalle rather than the House of Hohenzollern. I know how to work with such opportunists!

And so he stole Marx’s entire scheme and implemented it in the name of the King. He hired leading social democrats into his government, united all the German states under now-Kaiser Wilhelm I, created the paternalistic welfare state, and not long after made socialism illegal. As Bismarck explained:

My idea was to bribe the working classes, or shall I say, to win them over, to regard the state as a social institution existing for their sake and interested in their welfare.

The new myth: We Care. By swallowing socialism whole, he had lucked upon the means to protect privilege against liberalism. Item #2 in The Communist Manifesto had been a graduated income tax. Implement that and the political class then has a throttle on the personal wealth of the rising entrepreneurial class. All the goodies capitalism produces can be kept—the goose can keep laying the golden eggs; we just get our eggs off the top. And we need a lot of them because We Care.

The United States was birthed at the zenith of liberalism as the pinnacle of liberalism. Our Constitution guaranteed a society that was flat and free. Citizens were free to pursue their own self-interest because Adam Smith had shown that turns out to be good for everyone.

As word of the Bismarckian bombshell began arriving in the US, several things were going on.

Progressivism, the movement to implement Bismarckian social democracy in the US soon dominated both parties. However, the movement faced a huge impediment in the Constitution, a document crafted as a bulwark against statism. Here are some of the methods employed by progressives over the years in service of their great idea.

To be sure, there are many branches to these methods, and this list is far from exhaustive. But all such methods are in support of the great idea of progressivism. In a nutshell… 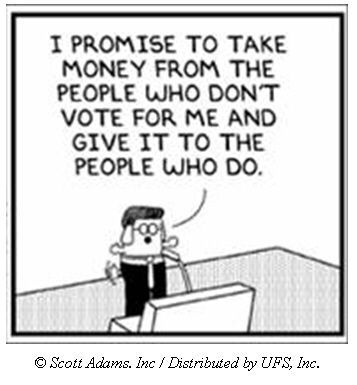 And so our wealthiest neighborhoods now surround our political capitols, especially Washington, DC, and our politicians no longer see themselves as lowly public servants: United States order of precedence.

Damn, Charles, that was beautiful. And frightening.